Couscous vs Quinoa Which is Better and Healthier?

The difference between couscous vs quinoa is as simple as: quinoa is a natural food, while couscous is man-made, and a pasta granule made from semolina wheat. They also greatly differ when it comes to their nutrient contents. An important point you need to remember is that quinoa is gluten-free and safe for those who have celiac disease while couscous contains gluten. There are still a lot of differences and similarities between these pseudocereals you can learn from this article, you’ll surely won’t regret reading. 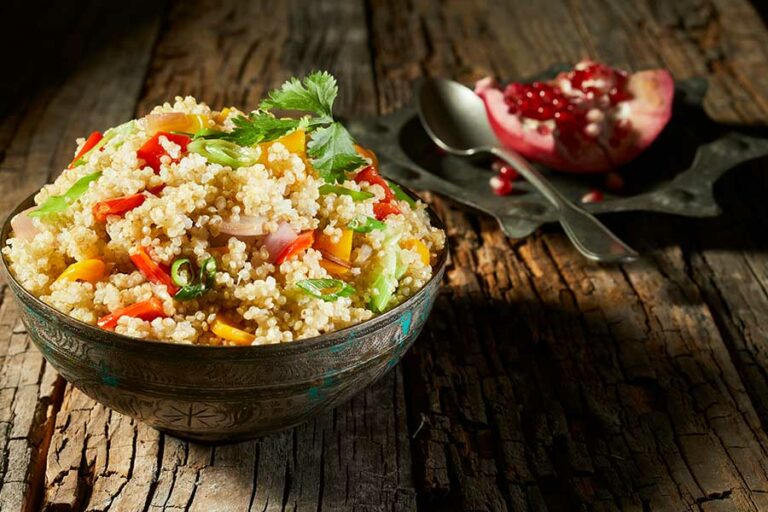 Grains might be too complex and confusing for some to talk about as they come in many types that are almost similar by appearance, taste and nutritional value. Quinoa vs couscous, for example, look very much identical but greatly differ in production, texture and health benefits.

This article talks about couscous vs. quinoa, how they differ from each other, their culinary functions and nutrient-content differences. This gets interesting as not only you’ll be able to distinguish them more quickly but you’ll also get to know how healthy they are and how they can go well with your meals.

All About Quinoa and Couscous

Quinoa is a crop primarily grown for its edible seed. It is actually the seed of a plant related to spinach and amaranth and is considered to be a pseudocereal—meaning, it’s neither a grass nor a true cereal but it is consumed as grains. Quinoa is naturally gluten-free and is rich in fiber and protein.

Couscous is tiny pellet pasta produced from semolina wheat flour which is made of durum wheat. It is not from a plant but is also consumed as grains, similar to quinoa. As it is pasta, couscous is not gluten-free but is healthier to eat as it is lower in fat and calories.

What’s The Difference Between Couscous and Quinoa?

It might be hard to see the distinction by just a glance but the difference between quinoa vs. couscous is that quinoa is harvested directly from a plant, while couscous is not from a plant at all. Although they are quite similar in taste and culinary uses, they separately belong to different food groups. I have listed more comparisons between them, highlighted per category. See below.

Quinoa, which belongs to the Chenopodiaceae, or goosefoot, family, was cultivated for centuries in South America before the colonization of the Americas. The Incans called it “the mother of all grains.”

Couscous is known as the national dish of Morocco and is a staple food of Northern Africa, Algeria and Tunisia. They come in three different quinoa varieties — red, black, and white, all of which are cultivated in the Andean region of South America.

Quinoa is easy to cook. Either steamed or boiled, it’s ready in just 10-15 minutes. It substitutes rice and pasta in healthy meals and is often eaten as a breakfast cereal. Quinoa is also quicker to cook than rice.

Any type of couscous, including instant ones, can be steamed. Commercial couscous is rolled granules made from ground semolina mixed with water which is then steamed, dried and sifted. Some local types of couscous can be cooked and ready in just 5 minutes.

Both quinoa and couscous have nutty flavor but quinoa is fluffy, creamy, crunchy, and nutty. Its texture when cooked is smooth and has a chewy texture.

Couscous, on the other hand, tastes nutty and subtly sweeter than quinoa. It is also light and chewy yet firm when cooked.

80% of quinoa in the world is produced in Bolivia and Peru, with the latter as the largest producer, followed by Bolivia. Quinoa, mainly consumed by humans, can also be used as animal feed. It can replace clover hay for up to 45% of the animals’ diet. Quinoa is mostly eaten by vegetarians as steamed, in place of rice. Other culinary uses of quinoa include quinoa salad, pancakes, pasta, crackers, etc.

Although couscous is a staple food in Morocco, France is the largest producer of it with 140,000 tons, followed by Italy. France takes 42% of the world’s production of this food. Couscous is mostly eaten as steamed, especially as pilaf. It is commonly found as a base of many Middle Eastern dishes.

Quinoa is known for its high content of protein and fiber and other vitamins and minerals such as folate, iron and magnesium. Since quinoa is a seed, it is gluten-free which is safe for those who have celiac disease. Quinoa also has anti-inflammatory and antioxidant effects through a compound called flavones, which protects our body against damage from free radicals. Quercetin and kaempferol are also present in quinoa, which boosts our immune system.

For every cup of cooked quinoa, our body can digest 39g of carbohydrates, 8g of protein, 4g of fat, 5g of fiber, and 222 calories.
Couscous, same as quinoa, is also fiber and protein-packed but is lower in amount than quinoa. It is less in calories and fat but isn’t a complete source of protein. 1 cup of cooked couscous contains 37g carbohydrates, 6g protein, 0.3g fat, 2.2g fiber, and 176 calories.

Couscous vs Quinoa: A Comparative Chart

You should, by now, be able to differentiate couscous vs. quinoa, especially their health benefits. Here is a more straightforward comparison and nutrition facts of couscous and quinoa:

Unlike any other grains or food groups, I can say that it is easier to differentiate couscous from quinoa by appearance and health benefits. But the key answer to the question, ‘What’s the difference between couscous vs quinoa?’, is simply: quinoa is a natural food, while couscous is not. This fact also confirms that quinoa is indeed healthier than couscous.

But the choice still varies from person to person and also depends on the situation. If by preparation, I would opt for couscous since it is easier to cook and tastes sweeter than quinoa. Nutrition-wise, quinoa is truly the winner. With its complete protein and high fiber content, you wouldn’t need any more synthetic supplements to get your daily requirement of these nutrients.

What’s the Difference Between Durum Wheat vs Whole Wheat?

Turmeric Rice: All About it and How to Make It