Porridge vs Oatmeal Health Benefits Porridge vs Oatmeal: these two terms may seem confusing to many but these both are used interchangeably as referring to something eaten as a breakfast or sometimes as a main … 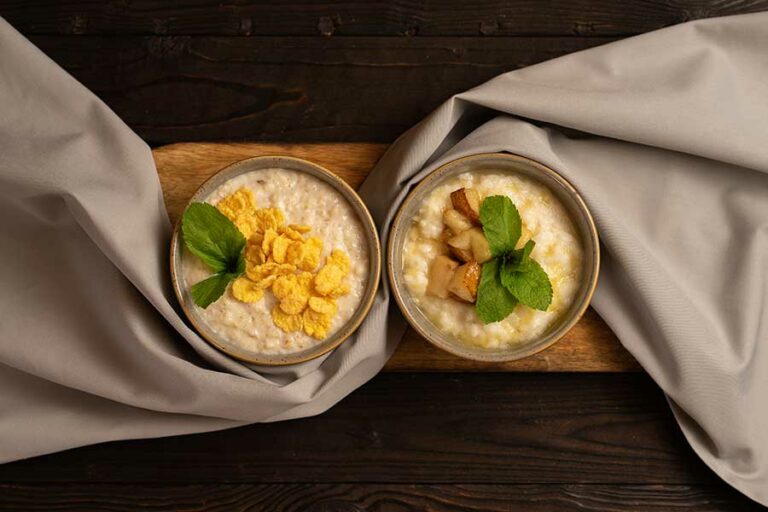 Porridge vs Oatmeal: these two terms may seem confusing to many but these both are used interchangeably as referring to something eaten as a breakfast or sometimes as a main course meal of any time of the day. Both taste good, are satisfying and are nutritious. But if you want a clearer distinction between these two, this article is for you.

This post discusses what porridge is and what oatmeal is, and talks about what nutrition and health benefits we can get out of them. This also addresses what their difference is and how they compare.

Porridge is a general term used to describe a type of cooking where a grain, cereal, or legume is boiled in water or milk. The consistency of porridge is soft, creamy and thick and can taste sweet or savory depending on how one cooks it.

Meanwhile, oatmeal is a type of porridge, made by boiling oats with milk or water. As this is also porridge, its consistency as well is creamy and thick and can also taste savory but is mostly eaten sweetened with honey or sugar.

What’s the Difference Between Oatmeal vs Porridge?

There are a lot of points we can lay out when it comes to how they contrast but the key difference between porridge vs oatmeal is that—porridge is the umbrella term used to describe the kind of cooking with a creamy and thick consistency. While oatmeal is a type of porridge, which is the usual way oats are cooked and eaten. There are many ingredients we can use to make porridge: cereal grains (like oats), legumes or other kinds of vegetables. Oats as well can be eaten in many other ways apart from being cooked as porridge. There are still more facts about their differences and similarities if you read further below:

How did humans first come up with porridge and oatmeal?

It was believed that porridge was first consumed by hunter-gatherers about 32,000 years ago. Variations of porridge already existed long ago including porridge made of rice which was said to have emerged in China 4,500 years ago and quinoa porridge found in other Asian countries at least 3,000 years ago.

Oatmeal, on the other hand, was said to have been first eaten by the people from the Old Stone age, when they used wild oats and flatbread to build or bake to make porridge at this time.

Since porridge is a kind of cooking, there are many ingredients you can use to make semi-solid food with a thick and soft texture. Below are some of the most common types of porridge, known worldwide:

How They Are Made

Porridge is made primarily from water and grains most commonly with oats, rice, wheat, or corn:

The steps are almost similar to the rice porridge but this must depend on the type of oats you are using:

Health Benefits of Porridge vs Oatmeal

Both dishes, although may differ in ingredients, contain essential vitamins and minerals especially protein and fiber which are energy boosters that fuel our body for a long day ahead. Since porridge is primarily made of grains, it provides a considerable amount of nutrients. Rice porridge, for example, has potassium, B vitamins, magnesium, zinc, iron, selenium, and manganese, which are all important for bone growth and energy.

Similarly, oatmeal contains soluble fiber beta-glucan which helps in reducing the risks of heart diseases. This is also high in protein and does not contain a significant amount of sugar hence, this is a great choice for consumers who have diabetes and other blood sugar-related problems.

Bananas and other tryptophan-rich foods in porridge may increase the release of serotonin, which is good for mood and mental health. Serotonin levels (our mood stabilizer) are also thought to be elevated by oats.

The thick and creamy texture of porridge, surely makes your meal heavier than the other way of cooking your grains (especially rice when steamed). Rice porridge and oatmeal both contain fiber that improves satiety, thus reducing the chances of over-eating.

Oatmeal and whole grain porridge both contain a lot of fiber. Bowel health is enhanced by fiber by increasing and softening our stools.

Although they are being interchangeably used, the two terms are different by definition and by the ways they are made. Porridge is a dish itself while oatmeal is porridge, made of oats. Nutrient-wise, you can never go wrong with these two choices, especially when using whole grains rather than refined ones.

No matter how you start your day, be it rice or quinoa porridge or oatmeal, remember not to skip the most important meal of the day. Exercising without eating your breakfast won’t work—it may just lose your weight in an unhealthy way.